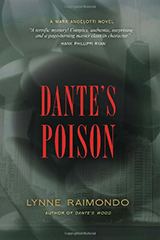 Asked by his friend, attorney Josh Halloran, to assist as an expert witness, psychiatrist Mark Angelotti is drawn into a complex case involving a major drug company and its practices of pushing their products to patients beyond the recommended usage. Josh represented a doctor who was being sued following the suicide of two teenagers who had used the company’s product. Around the same time, a well-known Chicago journalist died from being dosed with the same drug. The woman accused of his murder is the former boss of Mark’s girlfriend, Hallie. Hallie had asked Mark to assist her in learning about the medication and its proper usage, but their investigation was interrupted when they were attacked. With Hallie left in a coma, Mark is more determined than ever to continue his investigation.

Readers will want to start with Dante’s Wood, the first novel in the series, for an introduction to the many characters in this entertaining tale.