East of Ecstasy: Hearts of the Anemoi 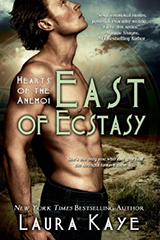 When visions of darkness and violence begin to invade Annalise Fallston’s quiet life, the compulsion to paint is urgent and terrifying. The appearance of Devlin Eston, the stranger from her visions, embroils Anna in a war between the Anemoi, masters of the winds and guardians of the seasons, and Eurus, a mad and power-hungry Anemoi whose crimes against fellow gods have earned him a death sentence.

Alienated by the mistrust of the Cardinal gods, Devlin has spent centuries waiting for an opportunity to escape his psychopathic father, Eurus. With the help of Anna and her newly discovered ability to paint scenes from the future, Devlin must join in the final battle against his own father.

Laura Kaye’s East of Ecstasy, the final novel in the Hearts of the Anemoi series, is an accelerated romance with a deep cast of mythological figures.

Although the plot is commonplace – good guys versus bad guy, world at stake, love conquers all – the particular challenges facing Devlin and the Anemoi are intricately detailed. At times, the story is weighed down by the complicated lore, but the scenes involving Anna and Devlin are electric. In particular, the transformation of Devlin from a tortured loner into a powerful, loving man makes this novel worthwhile. Familiarity with the earlier Anemoi novels is recommended before reading East of Ecstasy.