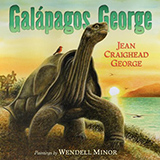 The Galapagos Islands, known for their incredible variety of species, was the home to a rare long-necked giant sea turtle named Lonesome George. Jean Craighead George, who has authored over one hundred children’s books, celebrates wild things and wild places by capturing Lonesome George’s journey in Galapagos George. This book provides incredible paintings by Wendell Minor and is a fitting tribute to both Lonesome George and Jean Craighead George, who died within weeks of each other in the summer of 2012. Since this book meets the Common Core State Standards for English Language Arts/Science and Technical subjects, it can be used in a classroom setting to introduce the concept of evolution and species extinction in a very approachable format. Hopefully this book will help people remember Lonesome George – who was the last of his kind – and his ancestors.