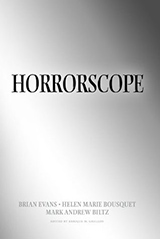 62-year-old Helen Wilson never asked to be a psychic. She never expected to be able to read tarot cards, talk with the dead, or see into the future. But fate (and a very interesting, very old wooden table) picked her to be a messenger. For $25, Helen tells clients the truth, good or bad, in a half hour reading from around her kitchen table in Naugatuck, Connecticut. Sometimes her psychic revelations bring excitement, reassurance and happiness to those seated across from her and they are forever grateful. Other times her words cause heartache, pain and denial and people are angry with Helen. But she never expected her psychic gift to put her in mortal peril.

After witnessing Helen accurately call plays during a Yankees vs. Red Sox baseball game, the Nicolo crime family learns of her astounding psychic ability. All the mob boss can see are dollar signs. If Helen can tell them the safe times to pull of their heists and con jobs, they’ll avoid jail time and make more money than ever. Helen detests the idea of using her celestial gift for illegal purposes, but how can she resist when her own life and the lives of everyone she cares about hangs in the balance. Horrorscope, by Brian Evans, Helen Marie Bousquet and Mark Andrew Biltz, is a fun, entertaining thriller about what happens when the bad guys mess with the wrong psychic, one with friends in powerful and paranormal places.

The characters use explicit language because they come from a world not concerned with political correctness. However, there is an overemphasis on many of the men in the story taking their anger out on Helen by calling her derogatory names. As a female reader, I thought this was much too excessive and did nothing to further the plot, make an already strong story any stronger, or make believable characters any more believable. Horrorscope is currently in negotiations to become a major motion picture. The authors’ work would translate brilliantly into a film script. The book’s sequel is sure to reveal lots more mysteries and intrigue.