In the Valley of the Yangtzee: Stories from an American Childhood in China 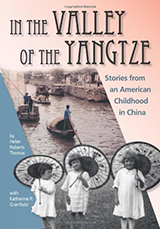 An American Childhood in Pre-Communist China

Helen Roberts Thomas, the daughter of American Episcopalian missionaries in southern China, was born in China and lived along the Yangtze River in both Nanking and Shanghai during the 1920s and ‘30s. As an insightful memoir, her story is relevant to anyone interested in pre-communist China and the history of China in general and missionary life in particular.

Helen and her siblings were “mish kids” (also sometimes called “Third Country Kids”, as Americans living abroad). After their father became the Episcopalian Bishop of Shanghai, the family had a unique view on (then) current events in China as well as unprecedented access to many renowned celebrities such Charles and Anne Lindbergh, Pearl Buck, Chiangkai-shek and Mme. Chiang and Henry Duke of Gloucester.

Life in southern China in those days was never dull, and not always safe or happy. Helen witnessed floods, famines, rebellion, war and the rise of both the Nationalist Kuomintang and Chinese Communist parties. In the Valley of the Yangtze is a heady mix of history, politics and culture, clearly told and well illustrated with many historic photos. It is a fascinating read.