John Muir and the Ice That Started a Fire: How a Visionary and the Glaciers of Alaska Changed America 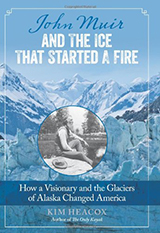 This is an absorbing book, especially for fans of Scottish-American naturalist John Muir (1838-1914). It is all about his early studies of Alaskan glaciers and glacial geology, and of America’s early national park and forest conservation policy-making. The book chronicles Muir’s exploration of Alaska starting in 1879, his association with Tlingit Indians and missionaries, his role on the Harriman Scientific Expedition to Alaska in 1899, and the impact of his friendship on Theodore Roosevelt and other naturalists and leaders after the turn of the 20th century, as well as his family life, which was profoundly important to him.

Muir’s legacy, says Kim Heacox, is as our “patron saint of flowers and birds, glaciers and bears, wilderness and wolves.” By far the most vocal nature preservationist in a young nation hell-bent on making money, Muir became our corrective lens, our better conscience. He spoke for the wild places and gave them credible value. He showed us an Alaska as a New World’s new world, a place to reimagine what remained of America, and our destiny in it.” He was, in short, “America’s nature prophet” who “continues to challenge us to see what he saw and do what he did, and more.”