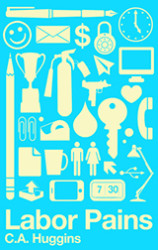 Kevin Taylor, the protagonist of Labor Pains by C.A. Huggins, isn’t happy with his life. And it seems easy to say why. Without a doubt life can’t be satisfying for a person, who like Kevin, is so arrogant, conceited and simultaneously envious toward other people. As a senior Kevin has a C-minus GPA, a below-average SAT score, sports a miserable goatee and wears purple clothes. He can’t understand why he is completely unpopular among school girls. He honestly thinks setting himself apart from the rest of the students shows off his complexity! Sure it does.

“I’m not a part of any particular clique. I’m just me…I’m intellectually and emotionally superior…I notice things that others don’t.”

Fifteen years later, Kevin is still clueless about his passions and desires. He has worked for a big insurance company in the same poorly paid insignificant position for seven years. Kevin hates his job and is constantly looking for another. He has fun by avoiding doing the actual work and gives his co-workers ridiculous nicknames and abuses customers. Although he is  lazy and incompetent, Kevin believes he deserves a promotion. He decides to get what he wants at any cost and follows the instructions of his buddy and begins scheming against his rivals. It’s a hilarious read…you won’t predict how it all ends.

Work and the working place environment is a slippery subject matter. C.A. Huggins’ humorist approach to this rarely discussed topic is an original and appropriate way to deal with it. It’s probably impossible for people to find a job that they would be passionate about all the time. There are many people who aren’t happy about their jobs. People, who like Kevin, work out of fear, live from paycheck to paycheck and can actually relate to his situation. But, while understanding Kevin’s difficult circumstances, would readers also sympathize with him? This dark comedy with some criminal action thrown in brings a lot of difficult issues up to the surface.