Left at the Mango Tree 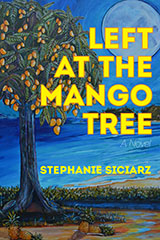 Vivid and Luscious Tale of Love and Magic

Almondine Orlean, by her own words, grew up in black and white. Born on the tropical – and some say magical – island of Oh, Almondine stood out for the color of her skin, which was not black like her parents, but white. While Almondine’s mother accepts her color and her father believes in her faithfulness, not everyone is so welcoming. Almondine’s grandfather, Raoul, cannot accept his daughter’s insistence that she is faithful to her husband. He also does not believe in island magic. He becomes convinced that his daughter had a fling with the only white man on the island and he sets out to prove it. He becomes obsessed with his goal of finding the truth at the risk of losing his job, his family and his mind. As he investigates, he finds that the island does not give its secrets lightly and that sometimes, the truth is best left buried in the sand.

Left at the Mango Tree is an outstanding novel by author Stephanie Siciarz. She creates an island world that is so vivid. The reader can feel the warm salty air, taste the pineapple and feel the sand between their toes. The story of Almondine is the story of the key players in her life: her grandfather Raoul, her parents, and her grandmother’s best friend and local midwife, Abigail. The stories connect at many points throughout the novel and paint what the author describes as a mosaic of Almondine’s life. The characters, like the environment, are rich and complex. Their love for each other, fears and secrets make them endearing and real. The secrets of Almondine’s origins come slowly but rewardingly, although in the end the revelation is secondary to the overall search for belonging and identity. Wonderfully written from start to finish, Left at the Mango Tree is a delightful novel that creates a world which will linger with the reader well past the last page.