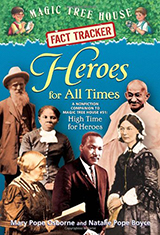 All About Heroes for Young Readers

Many of the widely popular books in The Magic Treehouse series for older elementary-aged children have a nonfiction companion book that delves into the facts behind the story. For the recent High Time for Heroes, in which globe-trotting and time-traveling siblings Jack and Annie find themselves getting to know the then not-yet famous nurse Florence Nightingale in Egypt in the nineteenth century, series author Mary Pope Osborne and her sister Natalie Pope Boyce highlight Nightingale’s life and achievements along with “five other incredible people who made the world a better place.” While Nightingale worked to better the conditions for patients in hospitals, the book shows young readers a variety of ways that people have unselfishly made the world a better place. Harriet Tubman helped to transport slaves from the South to freedom in the North through the metaphorically-named Underground Railroad. Susan B. Anthony fought for women’s rights, and Mahatma Gandhi peacefully protested British control of India. Martin Luther King, Jr. campaigned for the rights of black people, leading marches and demonstrations against segregation in America, while Scottish-born John Muir, a naturalist, advocated for the protection of wilderness and helped establish Yosemite as a national park. Heroes for All Times, having shared the lives of some of the world’s most cherished heroes, ends by encouraging its readers to work to make their world a better place.