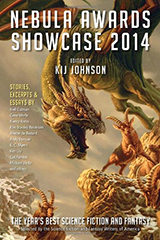 Lives Up To the Hype!

The future is back in this wonderful collection of stories that have won Nebula Awards and have been honored by the Science Fiction and Fantasy Writers of America. This collection from award-winning editor Kij Johnson veered more toward the science fiction side with wonderful stories about the future, adventures in space, and alien invasions. The collection shows that it is still possible to evoke awe and wonder, even for those who have read many of these stories before.

“There is a second conventional wisdom that pulls contrary to this current, that the field is not graying but growing.”

The Nebula Awards prove that they’re still going strong, with their 50th anniversary approaching next year. The bulk of the book features Nancy Kress’s fantastic Nebula Award-winning novella, After the Fall, Before the Fall, During the Fall, which casts human beings as an endangered species. There is also an excerpt from Kim Stanley Robinson’s amazing novel, 2312, which shows that people can still try to predict the future. Gene Wolfe was also celebrated and honored this year.

The Nebula Awards Showcase 2014 is a short collection that requires a slow and thoughtful read, as it covers a lot of territory. It was nice to see so much galactic science fiction this year, since in recent years the collections have been more satisfying for the fantasy reader.