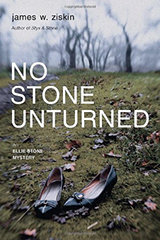 Ellie Stone is struggling to keep her job as a reporter for the local newspaper in New Holland, New York in 1960. Listening to the scanner in her car, she hears a police call reporting a body found in the woods. Ellie heads there hoping to scoop the story. The deceased turns out to be a young socialite, the daughter of a wealthy local family. The police do not have a camera available to photograph the scene, and ask Ellie to take pictures for them. After the police have gone, she finds three small oil spots on a nearby road and a Dr. Pepper bottle cap where the body had been buried.

Determined to get to the bottom of the mysterious death, she begins an investigation of her own which leads her to discover a secret life led by the victim, a story which extends to Boston where the young woman was attending college. After several attempts to contact the college roommate, Ellie drives to Boston and discovers that the roommate has also been murdered. Later, upon returning home, Ellie faces her own dangerous situation as she struggles to evade someone who is following her.

An intriguing mystery set in simpler times, this stylish story is immensely enjoyable. The author has captured the attitudes and setting of the ’60’s perfectly, and the people come to life on the pages, bringing readers to worry about Ellie’s safety, and to fear the murderer will not be caught.