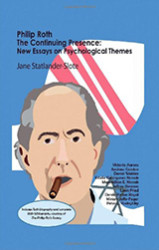 Jane Statlander-Slote’s collection Philip Roth – The Continuing Presence: New Essays on Psychological Themes is not for the faint-hearted. Philip Roth is a Pulitzer Prize-winning and National Book Award-winning novelist who has been accused of scatology, pornography, misogyny, anti-Semitism (curious for a Jewish-American writer), narcissism and neuroses. Statlander-Slote’s gathering of scholarly essays delve wholeheartedly into the psychoanalytical tendencies in Roth’s wide oeuvre of fiction. Statlander-Slote is a Roth scholar who grew up, like Roth, in Newark, New Jersey, and who, like Roth, graduated from Weequahic High School. She is also an English professor and a renowned Roth critic, and her gathering of critical essays here are astute, timely, and readable for those with an interest in Roth, literature and/or psychology.

The collection also includes interviews, a brief Roth biography, and an extensive listing of Roth’s publications. As essayist and scholar Jeffrey Berman writes, Roth’s “characters are the most thoroughly psychoanalyzed in literature.” Berman’s essays and others in the collection allude to a psychiatric case study that has haunted Roth’s career: In 1967, Roth’s psychoanalyst at the time, Dr. Hans Kleinschmidt, published a 30-page essay titled “The Angry Act: The Role of Aggression in Creativity” in the psychoanalytic journal American Imago. While the case study ostensibly was about a fictional patient, readers – including Roth – easily saw the direct parallels to Roth. The detailed discussions of such topics as narcissism, castration anxiety, masturbation, anger, incest, and neuroses openly breached doctor-patient confidentiality between Kleinschmidt and Roth, leaving Roth exposed and ultimately influencing his subsequent fiction.

“When a Philip Roth character fiends himself lying on a couch, more than likely he is engaged not in sex but in psychoanalysis. Therapy becomes the most intimate and imaginative event in life for the beleaguered hero, the one love affair he cannot live without.”

As Statlander-Slote acknowledges and explores Roth’s psychoanalytic idiosyncrasies, she also recognizes Roth’s indisputable contribution to the American literary canon: “My own Philip Roth’s Postmodern American Romance de-hyphenates Roth as a Jewish-American writer, locating him squarely in the canon of American literature, specifically postmodern American Historical Romance,” she writes in her introduction. Roth, who is 81 and lives in Newark, is considered one of the most awarded novelists of his generation, including a Pulitzer Prize, two National Books Awards, and three PEN/Faulkner Awards. Statlander-Slote’s collection is an excellent contribution to Roth scholarship, although casual readers beware: The essays are academic in tone and presume a knowledge of Roth’s wider body of works, making this a book that will likely appeal primarily to those with an interest in Roth, psychoanalysis or the American literary canon in general.