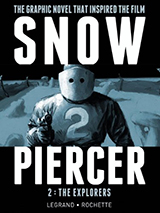 Snowpiercer 2: The Explorers is the second volume of the critically acclaimed French graphic novel. The Explorers follows refugee-hero Puig Vallès as he fights for freedom on the train where what remains of humanity now lives. Puig faces political deceit, maniacal preachers, and millions of miles of relentless tundra in his search for the truth. What became of the first Snowpiercer and its passengers? What really goes on at the front of the train? Puig is determined to find out – the answers could save them all.

“Across the white immensity of an eternal winter, from one end of the planet to the other, there travels a train that never stops.”

Written by Benjamin Legrand and Jacques Lob and illustrated by Jean-Marc Rochette, the Snowpiercer series is a beautiful, gritty tale of a frozen dystopian future. With Joon-ho Bong’s star-studded film adaptation already garnering praise, Titan Comics’ English translation of this French classic is a must-have for your collection.