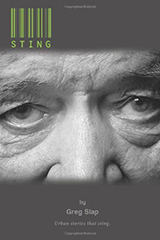 Sting, a compilation of short stories by Greg Slap, is written in a voice similar to the dark irreverence of Chuck Palahniuk. The characters in the stories don’t know each other, probably will never meet, yet they are connected in an over arching theme of death in a mundane setting. Each character has a unique reaction to circumstances of a single moment that pushes the boundary of the conventional.

Frank, the lead character in Sting (the title story) is a radio announcer for a popular show that on the surface appears to exploit the insane ravings of its listeners. To Frank, his show allows those “who otherwise wouldn’t be heard” to have a voice. He has a drink with a man who lives with a sinister secret, and afterwards is relieved to return to his safe version of reality, likening the meeting to a viewing of Frankenstein’s Monster.

The stories are rife with subtle connections. Jason, another lead character in the opening story, listens to Frank on the radio as he drives himself to work. A sudden turn off the freeway changes the course of his life. The family in Composure shares a name with a violent figure from Frank’s past. In their story, the deeply ingrained violent habits persist even after a father’s death. Lu a sister from Composure is not the same Lu who attends an Overeater’s Anonymous meeting in The Powerless where powerlessness against addiction is an excuse for the inhumane behavior exhibited by its attendees. This story highlights how forgettable a single death can be. The final story in the collection names a high school bully Kyle. It is a classic tale of high school hazing and the new kid’s unique revenge. It is told from the perspective of a periphery character named Collin. He is neither bully, nor target, but empathizes with both parties as the action plays out to its descriptive conclusion. Cole, the perspective character in Dressing Toby Hernandez could be an older version of Collin risking his future in a single act of empathy counter to his sense of self preservation, and perhaps making up for the inaction of Cole.

These stories expose humanity in a raw unflinching format. Some authors shy away from the most important moments of a scene, choosing exposition instead as a means to get to a point. Not Mr. Slap. The reactions of these characters to their situations are completely organic. His characters remain in the moment no matter how distressing.