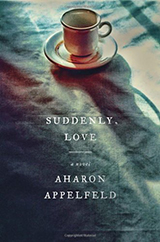 Ernst, a 70 year old Red Army war veteran struggles with depression and despair as he tries to write. Irena, is an unmarried thirty-four year old that struggles with the loss of her parents, as she takes care of Ernst. Every afternoon, after leaving her job at Ernst’s house, she returns to her parent’s apartment that remains unchanged. It seems that Irena barely has the will to live since she really has nothing to live for, except for taking care of Ernst. Irena’s parents were Holocaust survivors, which haunts her, while Ernst is haunted by his Communist past. As Ernst’s health worsens, his frustration with his writing sends him into a spiral of despair. Ernst then lands in the hospital and Irena does not leave his side. She does whatever it takes to keep Ernst positive about life and about his writing. Irena knows she loves Ernst but making Ernst realize he loves her takes a bit more time.

Appelfeld expertly shares details so that the reader is able to piece together how Irena and Ernst’s history is so pervasive in their present lives. The story progresses like molasses as the characters grapple with real issues. Overall this reviewer feels that the book was too depressing to feel sorrow for the characters.