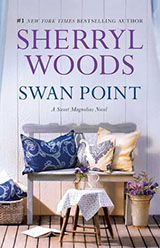 In Serenity, South Carolina, the Sweet Magnolias know everything and everyone. Nothing happens without their attention and involvement, so when Gabe Franklin returns to the scene of his childhood troubles, they’ve got their eyes on him…and he’s got his eyes on recently divorced Adelia Hernandez. Ready to leave his rebellious youth behind him, Gabe wants to make a fresh start in Serenity for himself and Adelia and her children, but his greatest obstacle may be the fear that some wounds never heal, not even in beautiful Serenity.

Sherryl Woods’ Swan Point is all about the relationship between Gabe and Adelia. Some of the pacing and framework is provided by Gabe’s renovation of Adelia’s “new” old house, but the novel is really about two adults finding a way to fit all their combined baggage into one metaphorical minivan already filled with wary children and nosy neighbors. Unfortunately, the majority of Gabe’s baggage is in his own imagination; what he and the residents of Serenity remember as a rebellious childhood is nothing more than a child defending his mother, so Woods’ heavy-handed reminders of his “bad boy” youth are unconvincing and distracting. Gabe’s mostly self-diagnosed bad reputation keeps him from allowing Adelia into his heart, and the added frustration of Adelia’s incredible lack of self-esteem helps to drag the novel out until the reader loses interest in their relationship altogether.

That being said, readers of small-town romances will appreciate the secondary characters, who are both bossy and sympathetic, and enjoy Serenity as an attractive and interesting setting for Sherryl Woods’ popular series.