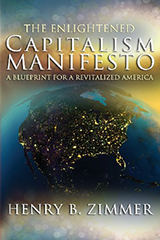 This is not a sophisticated book. That’s not a bad thing; the reader, not the writer, should exercise Sophistication. Mr. Zimmerman is an American with a dual Canadian citizenship. He lived in Canada most of his life and now lives in the United States. His credentials are as a chartered accountant who was prominent in writing Canada’s income tax software and in 1984, His work wound up as part of Intuit, of Turbo Tax and Quicken fame. Capitalism is an economic system and so he is more qualified than many to decipher its ins and outs. Having lived under two varieties of Democracy, he might also have insights into their workings that would be informative. That being said, the result is a mixed bag of progressive recommendations heavily tinged with the conservative.

The premise of the book is that “unbridled capitalism is obsolete and that our political system is broken as a result of corruption and the polarization of our major political parties.” Enlightened Capitalism is, in my words, socialism light: The same economic system only tempered by a social conscience.

His solutions range from impossible, to prosaic: Change to a parliamentary form of government, audit office holders for unearned income (graft), compulsory government service to effectively make employment for slackers so they will become taxpayers and not takers, this will allow for a flatter tax structure, and the use of referenda to decide the conundrums of the day like gun control, abortion and gay rights. A nationwide vote will decide the issues and everyone will abide by the vote. Yeah! Right! He has some good advice on personal finance.

Mr. Zimmer admits that it will take a grassroots movement to bring this to pass. This book is part of building the movement. At the end of each chapter, he poses questions. Leading ones, I must say, and a more comprehensive test/questionnaire at the end. He then invites you to visit his website and enter your answers so that He can fine tune and display progress. As a progressive myself, I wouldn’t mind moving toward some of his ideas but I’m afraid I’m not optimistic.