The Evolution of Mann: Herbie Mann and the Flute in Jazz 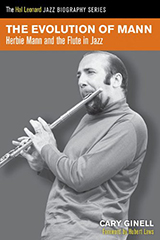 Although a number of jazz saxophone players played flute as a second musical instrument, Herbie Mann was the first jazz man who adopted flute as his primary. In The Evolution of Mann, author Cary Ginell describes how Herbie Mann’s exposure to several Latin players inspired him to move in that direction. In terms of popularity, if not in artistry, Mann fulfilled his childhood ambition to be the Benny Goodman of the clarinet. In a sense, the book raises more issues than evaluations about Mann’s career. Mann was an early exponent of jazz-pop music. He was constantly striving to bring world music influences into his art and he also managed to make some successful jazz records that crossed over into the world of pop. Yet, there is a sense of artistic inadequacy that is mentioned in the book, without the author reaching any conclusive evaluation of Mann’s work. Vibes player Dave Pike, who was one of many musicians who played with Mann, describes Mann’s show business persona, and asserts that “he wasn’t much of a musician.” Other colleagues tend to be more respectful, although Mann’s tone quality as a flute player is not generally applauded by critics or musicians. Similarly, some of Mann’s colleagues describe him as being a generous band leader who paid his side musicians well, yet pianist Pat Rebillot, who served as an arranger for Mann is much less positive about his financial dealings with the man.

Those who are not familiar with Mann’s work will probably leave the book with the desire to listen to some of his music. Readers can then make their own judgments of his work rather than the character of this ambitious, complicated, thrice-married, ambitious musician.