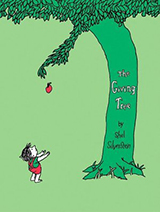 50th Anniversary of a Powerful Story of Life

This classic book has reached its 50th anniversary and deservedly so. The Giving Tree is an amazingly simple yet powerful story of a boy and his tree, of love and sacrifice. A tree is planted and the boy visits it every day. He played with the tree by gathering her leaves, climbing her trunk and swinging from her branches. He would eat her apples and play hide and seek around her wide trunk. This tree loved the little boy so much that she offered him her shade during a hot, summer day. The tree was so happy with love for this little boy, but as the boy grew older, he did not visit the tree as often. When the boy did visit on random occasions, the tree prompted the boy to swing on her branches and climb up high. The boy, however, was not interested in playing, instead he wanted money. The tree did not have money to offer but suggested that he sell her apples to make money. The boy was gone again for a long time and the tree was lonely and unhappy. When the boy returned, he wanted a house and although the tree did not have a house to offer, she suggested he take her branches so that he could build a house. When the boy returned to the tree he was an old man and too old to climb the tree; all he wanted was a boat to carry him away. The tree suggested that he cut down her trunk, build a boat and sail away. The boy did just that and the tree was happy once again, but not really. The tree had little to offer the boy when he returned since she was just a stump, but she offered the now old man a place to rest and was happy once again.

The illustrations are simple black and white line drawings but the power of this book is in the story. Many lessons are weaved within which can lead to thought-provoking conversations with your children. This is a powerful book that you and your child will think about long after putting it down.