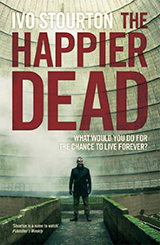 DCI Oates has been called to investigate a murder at the very exclusive Great Spa outside of London. The spa caters to the wealthy and powerful that have received The Treatment, a newfound treatment to keep people physically young forever. As he investigates, Oates soon finds himself fighting not only the Great Spa but also corruption within his own department and burgeoning riots on the streets in protest of The Treatment.

The Happier Dead by Ivo Stourton is a riveting book that seamlessly blends a murder mystery book with science fiction. The Treatment is an intriguing idea and one that lends itself to a world that is full of corruption and misuses of power. Oates is a wonderful main character and is complex, layered and thoughtfully written. The story moves at a fast pace, unfolds logically and doesn’t let up until the end. This book will have readers hooked from the first chapter. Fans of mystery and science fiction will equally enjoy this novel.