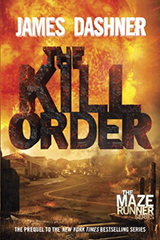 James Dashner’s Maze Runner series seems perfectly poised to cash in on the popular trend of teen dystopian fiction. The front cover is intriguing – a suburban neighborhood is ablaze with apocalyptic hellfire, and a bright stamp proclaims, “FORGOTTEN SECRETS REVEALED!” Unfortunately this prequel book in the series, The Kill Order, mostly fails to deliver. Young girl readers (and their mothers) will be disappointed to see an increasingly large population of female characters killed off or perhaps worse, written out. Teenage Trina, the female lead, is quickly reduced to an off-screen girlfriend, while Mark and Alec (more commonly referred to as “the old man”) take center stage for some dystopian male bonding. Beyond that, the writing is clunky and Mark’s frequent dream sequences do little to advance the story. Nevertheless, young readers will likely devour this brain candy, especially as summer vacation draws near. Those seeking substance would do well to look elsewhere.