The Mob and the City: The Hidden History of How the Mafia Captured New York 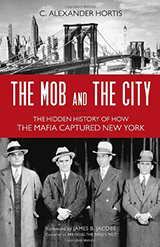 C. Alexander Hortis’ The Mob and the City takes a painstakingly close look at what everyone thinks they know about the Mafia in New York in the first half of the 20th Century. With a background in law, Hortis is well-prepared to dig through government files and databases to uncover the truth behind the myths. The research in this book is impeccable, and the content could be a great asset to anyone with interest in knowing more about the Mob’s activities from a factual rather than a romanticized point of view. The tone is serious and scholarly, with Hortis’ legal background surfacing in the many meticulous charts that are included, so this is probably not a book that will interest casual fans of crime shows or The Godfather. Students of history, however, will find Hortis’ well-researched debunking of the myths that have grown up around the Mafia appealing.