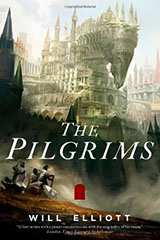 A World-Building Fantasy, But Lacking a Human Element

The first volume in The Pendulum Trilogy, The Pilgrims introduces a large-scale fantasy that revolves around alternate worlds. The two protagonists, Eric and Case, find themselves down on their luck when they discover a curious red door under a London bridge. To make things even stranger, Eric and Case witness a motley group of people suddenly appear through the door and rob a newsagent’s. A few days later, Eric and Case follow the thieves through the door on a whim. Finding themselves in a strange world full of spirits and magic, the free cities are in the midst of a hostile takeover and Eric and Case are somehow caught in the eye of the brewing storm.

“When the prisoner dragged into the room next door began screaming, Case thought at last he understood what was happening. He knew that for the rest of his days he’d never understand why, not even if someone told him. Some things, he guessed, you simply couldn’t know, and it would ever afterwards throw his mind sideways to think back on it and try to comprehend it.”

Will Elliott’s debut novel includes many classic aspects inherent in fantasy novels including magic, dragons, powerful beings, a world still relying on swords and shields, and a powerful madman. What the story doesn’t include are interesting characters; unfortunately all of the characters are two dimensional, making it incredibly difficult for readers to care about their plight. If, as a reader, world-building is what draws you into a story, then The Pilgrims may still be the book for you. If you’re a reader looking for interesting characters to identify with however, you may want to look elsewhere.