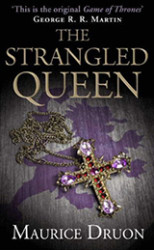 Game of Thrones Without the Dragons and Wildlings

Having been applauded as the original Game of Thrones by George R.R. Martin himself, the seven book Accursed Kings Series originally published in the fifties by French author Maurice Druon, was acquired by HarperCollins who started reprinting the series in English in March 2013. Book four is scheduled for a November 2014 release, with the other three books to follow.

“When I can be in command, everything will be different, and people will see what kind of a man I am.”

Rich in historical detail, The Strangled Queen surrounds the weak character of Louis X, his imprisoned and adulteress wife, Marguerite of Burgandy, and the prevailing challenge of lack of heir which cannot be acquired without a divorce to the queen or better yet, her death. Utilizing a rich cast of characters from theologians, commoners, and other members of the royal court, readers will be immersed into this fourteenth century world of treachery, manipulation and lies, giving pause to who is even the good guy, if any.

Falling a bit flat in comparison to book one, it is important to recognize this section of history, albeit arduous at times to read, is vital to the entire story line and probably why the shortest in the series. However, this book is still five star worthy and highly recommended. I only wish it was double in size!