To and From Gigs: Challenges, Choices, Chances, Changes 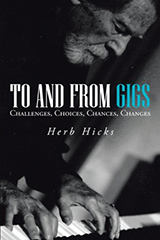 Herb Hicks is an American expatriate, who moved to Canada some forty years ago to teach art in Lethbridge, Alberta. Before, during and after his art career Herb has been a professional musician, playing jazz piano. The first half of the book describes his upbringing in Williston, North Dakota, his jazz studies there and in Los Angeles, and his variety of gigs in California, North Dakota, and later in Alberta.

As Hicks unveils his musical journey we meet quite a few interesting characters in his musical travels. In mid-career Hicks decides to become a painter, getting degrees in Minnesota and Santa Barbara. The latter leads to his employment at Lethbridge University in Alberta. Along the way he describes his Air Force service during the 1950’s in Europe, his three marriages, and his various life experiences. It’s all presented in a readable format. The reader might have benefited from some more details about his career in the visual arts, but all in all his life has been an interesting roller coaster ride.