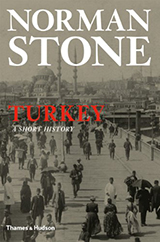 Turkey: A Short History is an interesting read for anyone enthralled by history; especially the history of a rich, culture-filled region like the Middle East. Genghis Khan, Suleyman the Magnificent and Ataturk, all the key players, are covered in this book. Norman details the rise and the retreat of the Ottoman Empire in great detail. Norman’s writing style is straightforward and his history lesson is unbiased. The chapters cover Turkey’s origins, the rise of a world power, and the erosion of influence and authority which ended the empire.

“There was always a strong religious element to Turkish nationalism, and Kemal Ataturk was very careful not to alienate it.”

The last chapter examines the crossroads that modern Turkey is now embarking on. Islam has a strong influence in Turkey, yet, its most prized leader decided to separate church and state in order to enter the modern world. A more difficult goal to master than one would think. Turkey: A Short History should be read to gain a better understanding of an interesting and influential region of the world.