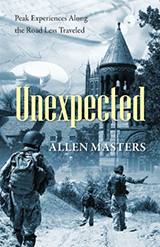 Adventures in Medicine and Military

Dr. Allen Masters has lived a full life since his birth in 1937. His experiences include his education, travel, medical research, military service, civilian employment, stonework and more. He has crafted some noteworthy events into essays and composed his memoir Unexpected: Peak Experiences Along the Road Less Traveled for readers’ enjoyment. The idea of this book came from Masters’ 15-year younger half-brother who urged him to write down his life experiences so he could get to know him better. Indeed, settling into Unexpected is reminiscent of sitting at the dining room table while a favorite great-uncle or family friend regales the listeners with tales from his long, multi-faceted life rife with irony, opinions and firsthand accounts that are often at odds with whitewashed historical textbooks.

Readers (listeners) follow Masters’ journey from the suburbs to Princeton, which he hated, to medical school at University of California San Francisco. Masters’ military life, from being an “obligatory volunteer” in Vietnam to afterward when he voluntarily signed on to become a Green Beret, afforded him several experiences, primarily medical, in places both across the US and the world. Back in civilian life as a county health director, he experienced the “sleaze and corruption” of class and political divides in Tacoma, Washington. Retirement led Masters to learning the art of stonework and renovating a cottage in southwest France, where he makes cultural observations and marvels at the ancient Pech-Merle cave paintings.

“The adventurer in me has been more than satisfied. And I have become wealthy, not so much monetarily as in the experiences I have had.”

This is not the memoir of a self-confessor mining the inner recesses of the soul, but a series of interesting scenarios, ironies and pieces of avuncular wisdom. “For me,” Master says, “the purpose of writing a memoir is to probe one’s memory in such a way as to allow the most forceful memories to make themselves felt, to push them to the center of one’s consciousness. Then they can be recorded and examined.” So, pull up a chair.