What to Do When Your Brain Gets Stuck: A Kid’s Guide to Overcoming OCD 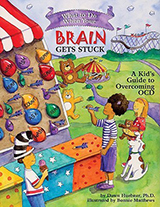 Don’t Get Stuck With OCD

Obsessive-compulsive disorder (OCD) is a debilitating disease for anyone, especially for children. Kids get thoughts stuck in their minds, feel like things are never right and seek reassurance about everything. But this neurobiological issue can be treated with a therapy called cognitive-behavioral therapy (CBT).

What to Do When Your Brain Gets Stuck: A Kid’s Guide to Overcoming OCD is an interactive guide that targets kids between the ages of 6-12. Author Dawn Huebner, Ph.D. helps kids learn to retrain their brains to make OCD powerless. Heubner is trained in clinical psychology and specializes in the treatment of kids and their parents in New Hampshire. Bonnie Matthews’ black and white illustrations capture the ways children suffering with OCD often get stuck and help to make OCD understandable to younger children.

Together Heubner and Matthews have produced a workbook where the information is presented in an age appropriate and developmentally relevant way. Through drawing, writing and self-help activities and exercises, children learn strategies to deal with OCD. For example, on one full page, Huebner asks readers to drawn what their pesky OCD would look like having a tantrum if it wasn’t listened to all the time. Another activity asks kids to list the bad things OCD tells them might happen and then what they need to do to keep those bad things from happening. Later in the workbook kids are asked to draw themselves overcoming OCD. Huebner sets children up with “tools” to combat OCD (i.e. “show OCD who’s Boss” and “Talk Back”). Finally, Huebner writes a bit about relapse but encourages kids that they can fight and show OCD that they really are the boss!

This is a great book that will motivate and educate. Parents can help their kids by being a coach and empowering them. Share this resource with teachers and therapists if your child is already in therapy. Good luck on getting unstuck!