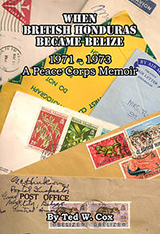 With his obvious love for athletics, Cox enters into British Honduras eager to teach and assist the country in becoming an international athletic contender and competitor. The time Cox spent in British Honduras has had a lasting impact, both for the people and for the country.

Cox demonstrates how leadership, education and enthusiasm can bring different people together to create short and long-term success. Cox takes the reader into his world as a volunteer and community leader using his PCV journal, letter excerpts and his own photographs. With these personal artifacts, the reader is presented with a fresh take of the historical moments leading up to the name change of British Honduras to Belize.

One of the great things about his memoir is that Cox never tries to gloss over any setbacks or failures. Whether it is someone stealing a lobster, an athlete losing interest, or a bus with no open seats, Cox takes everything in stride. This optimistic and confident approach takes readers into the life of a Peace Corps Volunteer, a treat for those who are serious about becoming one.

When British Honduras Became Belize is the perfect memoir for aspiring and experienced PC Volunteers, while those interested in history will also enjoy this intimate read. This book is a beautiful and memorable memoir of the life of a man who had a strong work ethic and kept a smile on his face as he volunteered during a historical period in Belize.