Where the Rock Splits the Sky 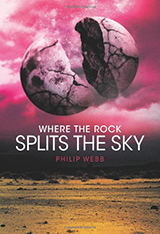 In Philip Webb’s Where the Rock Splits the Sky, earth has been captured and its rotation ceased by aliens known as Visitors to the humans who survived. Fifteen-year-old Megan has decided it’s time to delve into the Zone in search of her missing father – and not a moment too soon! Bandits from the Jethro Gang – Visitors who use human skin to blend in with the population – are hot on her tail. Unfortunately, the Zone is a deathtrap where the laws of physics don’t necessarily apply. Megan and her friends must band together if they hope to survive the Zone.

The driving concept in Where the Rock Splits the Sky is an interesting one, and the strangeness of the Zone is fascinating. Unfortunately the book goes downhill from the descriptions of the Zone, and characterization and plot suffer in comparison. Due to the narrative style and the age of the main character, this is a Young Adult novel that will most likely appeal to a slightly younger middle grade audience, rather than the typical YA crowd.