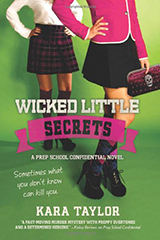 Don’t judge this book by its (LOUD) cover – Kara Taylor’s Prep School Confidential series is Veronica Mars meets Dennis Lehane. In Wicked Little Secrets, Taylor’s precocious girl detective Anne Dowling is back for her second semester at Wheatley Prep. Still reeling from the murder of her roommate Isabella, Anne barely has time to regain her balance before she’s thrust headfirst into solving a thirty-year-old cold case. Worse still, she has college to think about AND spring formal plans to make!

“I’ve been expelled from my beloved Manhattan school, questioned as a person of interest in a murder investigation, and nearly shot to death in the woods, but I’m convinced Monday morning is the worst thing that’s ever happened to me.”

Refreshingly smart and quick-witted, Taylor’s is a thoroughly optimistic portrayal of American education, peppered with references to Milton and Spenser, and she writes the kind of honest portrayal of teenagers that only someone who recently was one can. Almost-totally-reformed party girl Anne is a thoughtful, empathetic character with a strong moral compass, someone young readers can relate to while still enjoying a fast-paced murder mystery. As a twenty-something author, Kara Taylor shows incredible promise – when she decides to tone down the teen slang and turn up the grit, you’ll find her name at the top of the charts.