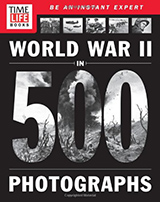 A Visual Understanding of the Second World War

Time Life Book’s new volume, World War II in 500 Photographs, is a stunning visual collection of both common and uncommon photographs from the era of the Second World War. The book breaks the conflict down by year, and then further into individual battles or actions. Some of the photos in this book are well-known, and anyone who has studied the war will recognize these images. The most valuable and interesting part of this book, however, is the vast number of uncommon or rare photos that are included. The descriptions of the battles and information about the war, while informative, are aimed towards a general audience. This book would be a good introduction to the Second World War, or a good addition for war buffs who are interested in unusual photos of the war, although there will be no surprises in the text.