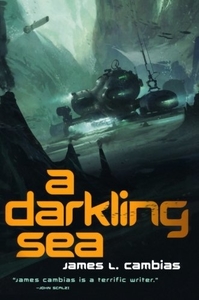 In James L. Cambias’ A Darkling Sea the planet Ilmater lies outside its sun’s goldilock’s zone, encased in a layer of ice kilometers thick. But, deep down in it’s abyssal sea, warmed by the heat of the planet’s core, life stirs. Not just life, but intelligent life! Unknown to these primitive intelligences, their planet is at the heart of a galactic struggle. Human explorers and the Shonen, another advanced alien intelligence and human’s first extraterrestrial contact, are arguing over how the life on Ilmater is to be treated. “Is it safe to study?” “Should no other life be allowed to make planetfall?”

“Broadtail is hungrier than he can ever remember being. He is in cold water, far from any active bottom trench or hotspot. His sonar pings reveal nothing but silt on the seafloor. Otherwise the water is almost silent. The ice above is low here, and sometimes he can hear it creak. From time to time he comes upon floating threads soaking nutrients from the water, and devours them greedily. They are thin and bitter and do little to sustain him. His bag of provisions trails empty from his harness. The small growths and bits of weed on his shell are getting thin, starving to death and dropping off.”

A small contingent of humans have been allowed to set up a lab on the planet’s ocean bottom but have been forbidden to interfere with sentient aliens of Ilmater, lest it spark a war between humans and Shonen. This tense peace lasts until one reckless and celebrity-obsessed human finds himself being autopsied by the curious Ilmatarans! What follows is a fascinating examination of primitive conflict, guerrilla war and cultural collision. A Darkling Sea is a fantastic return to sci-fi’s space exploration and alien encounter roots coupled with a nuanced and compelling look at alien cultures and cultural interaction.