A Pocket Full Of Needles by Steven P.R. 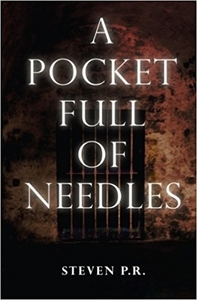 Against her parents’ wishes, Meryl, a recent high school graduate from Fairfax, VA, forgoes attractive offers from prestigious universities and instead accepts a position as a home-school tutor for the Creighton’s daughter Dana. Dana is an artistically talented but troubled teenager who has been expelled from school after a violent outburst. She hasn’t spoken a word to anyone since her little brother Ian’s death. Dana’s mother is frustrated with her teaching job and her psychiatrist father is addicted to pills and liquor. Dana’s troubled home life is complicated by the fact that her parents blame her for Ian’s death, and of course, they make no small show of it.

The better Meryl gets to know Dana, the better she becomes acquainted with the Creighton’s stormy past. The shadow of Creighton’s third daughter, estranged from the family since a violent kidnapping left her addicted to pills, seems to hang over everything. While we don’t get to know her until the final third of the book, tensions in the house, and in the parents’ workplace are explained by references to her ordeal, and her unknown whereabouts.

Everything comes together in an unexpected and exciting conclusion, revealing hidden relationships and surprising shifts in loyalties. The trust developed between Dana and Meryl has an opportunity to take center stage as the drama literally comes home to find them. While the novel overall is a very short read, the author quickly and carefully develops characters that the reader will care about.

The text clearly would have benefited from an editor with a heavier hand. This is unfortunate, since the frequent typos, occasional awkward dialog, and three story lines that don’t quite come together as seamlessly as they might, distract from what is otherwise a smart and well crafted story. This, along with his previous sci-fi book, show that the author has real talent. I’ll be on the lookout for his next project.