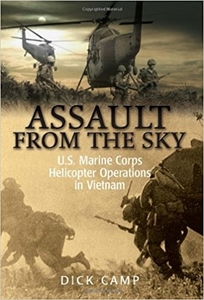 In Assault From the Sky, author and Marine Corps Vietnam veteran Dick Camp takes the reader on a historical, technical, and emotional journey through the sixteen different Marine Corps helicopter operations in Vietnam between 1962, and 1975. Camp breaks the narrative into the three main stages that helicopters played in the combat operations in support of ground troops in Vietnam, developing each through individual stories, interviews, and descriptions of both the exciting action, and occasional boredom, of being a combat aviator. Camp, himself a Marine Corps infantryman, comes to the subject with a perspective that is sometimes missing from other combat aviation historians, and will instead remind readers of those iconic Vietnam combat texts by John Culbertson.

Camp includes more than one hundred original photos, and dozens of interviews, which draw the reader into the individual stories. He sometimes slips without explanation into long passages of military jargon so deep that the non-specialist will be puzzled. But this isn’t really a book for the non-specialist. Military enthusiasts, and particularly those with an interest in Marine Corps history, or an affiliation with Marine Corps aviation, will absolutely find something to like.