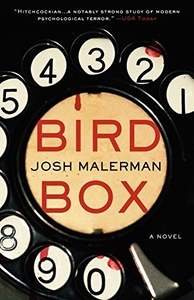 Five years ago people started dying. It began in Russia, where reports of people slaughtering those around them before killing themselves first surfaced. Soon these reports were worldwide, with no explanation for what was causing the extreme violence in people’s behavior except a persistent rumor that people had seen something. Malorie is one of the lucky survivors, and she has miraculously managed to raise two young children in a world of blacked out windows and blindfolds, where your sense of sight can kill. As her family’s situation grows desperate, Malorie risks a dangerous journey to a sanctuary that may not exist. They must travel twenty miles in a rowboat with only the trained hearing of the young children to guide them.

“How many times did she question her duty as a mother as she trained the children into becoming listening machines. For Malorie, watching them develop was sometimes horrific. Like she was left to care for two mutant children. Small monsters. Creatures in their own right capable of learning how to hear a smile. Able to tell her if she was scared before she knew it herself.”

Josh Malerman expertly captures the rising sense of dread in his fascinating debut, Bird Box. The tale weaves back and forth between Malorie’s plight, and the story of how her situation came to be. As the history is slowly revealed, the true horror of Malorie’s experience comes to light, as does her astounding courage. The characters are wonderfully vivid, and the story’s pages seem to turn on their own. Bird Box is a well-crafted novel that belongs on the shelf of every horror reader.