Cities Without Suburbs: A Census 2010 Perspective 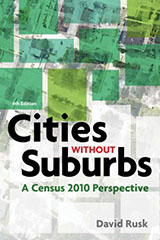 This Influential Classic on Cities Updated for Today

Cities without Suburbs by David Rusk originally came out in 1993 and since then has had a tremendous influence on scholars, city planners, and elected officials. Cities without Suburbs is an exhaustive look at every metropolitan area in the United States, going back through the 1950s. Rusk’s take away from all of this data, and the central thesis of the book, is that cities with hard borders, cities hemmed in on every side by suburbs with their own municipal government, fare much worse than cities with porous borders and broad powers of annexation. According to Rusk, the main consequence of this has been the concentration of poverty and racial segregation in these inflexible cities.

“Rather than focus just on the usual targets of “urban policy,” this book looks at all urban areas and examines in detail 127 urban areas and populations of 350,000 or more. It also focuses on entire metropolitan areas–cities and suburbs.”

This edition of Cities without Suburbs is updated to include the latest information from the US 2010 Census and the American Community Survey. Rusk’s conclusions remain the same despite the country’s changing demographics and population movement in the last 20 years.  In order for cities to succeed, they need to expand their borders, incorporating suburbs as much as possible within their borders. Rusk argues that in doing so, these cities will both grow and prosper, but also be better able to distribute wealth among residents while integrating races better than hard bound cities.