Down Clark Street by Michael Panno 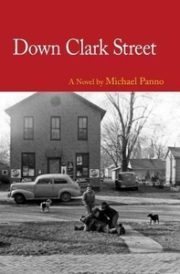 Michael Panno’s Down Clark Street is a rite-of-passage novel that doesn’t fall into easy stereotypes. We follow, in the first-person, Michael, who is making the difficult transition from little kid to young adolescent. It is wintertime in Hardscrable, Illinois and Michael shares an upstairs room with his older brother, Frank. At thirteen, Frank is the epitome of worldly knowledge. Michael’s family is barely scraping by. They hold together by acknowledging their troubles and differences, somehow keeping dysfunction at bay.

“In a house full of…skirmishes, an occasional defeat was to be expected. There were no grudges held.”

Readers learn that Michael’s mother is the rock the family depends on for its emotional survival. The primary source of conflict within the family lies between Frank and his father, Sam. Michael observes their ongoing war and wonders how both Frank and his father can be so stubborn. They constantly snipe at one another. Their battles continue throughout the story and they have trouble finding real peace. What does begin to evolve is an admiration between them.

Michael watches and learns. He has two main forms of entertainment in the winter: sledding down Clark Street when it is closed because of bad weather and playing his own solitary version of baseball, using an ingenious process of drawing cards to determine what happens on his imaginary field. Both activities allow him to escape the emotional roller coaster that life in a small town can bring. He loves the Dodgers and their move from Brooklyn to Los Angeles confuses him and gets him to thinking about the impermanence of things that are supposed to last forever. He dreams about pitching in Little League the following Spring.

Through his mother’s part-time job at the hospital, Mike meets Cornelius Brown. He is a terminally ill (“the Big C”) black man who lives on the first floor. Mike has seen someone waving a yellow hat at him through the hospital window as he pulls his sled to and from Clark Street. He is intrigued and wants to learn more about who it might me. When he finally meets Brown, or “Neely” as he prefers, they hit it off. Their talk automatically centers on baseball. Neely played in the Negro Leagues and offers to teach Mike how to pitch. This becomes the centerpiece of the story. As Mike learns to trust Neely, he learns to trust himself. That changes his relationships with his family, his friends and strengthens his ability to handle whatever life throws at him.

Panno shines when he writes in a way that leaves readers guessing about what a character means. What someone says may not be all he or she really means. He weaves his story and subplots skillfully and arrives at the bittersweet ending without leading the reader astray. The story loses momentum in a few places. I wanted Panno to write about more of Mike’s relationship with Neely and less of the sometimes convoluted family dynamic. I also wanted more detail during the Little League tryouts. We are told what happens, but I wanted to be there. I wanted Neely to be there, if only in Michael’s heart.

We watch Michael grow throughout the novel, pulling for him, hoping he gets what he wants and needs. Panno delivers without descending into sentimentality. This novel offers a clear and credible snapshot of small town life in the late 1950s. That alone makes it a valuable read.

Jim Stewart has published poetry and short fiction in several journals, including: The Alembic, Mostly Maine, Orange Willow Review, Orion Magazine, Rattapallax, The Blue Hour, and Tulane Review. His debut novel, Ochoco Reach, was released by Word Hermit Press in January of 2016. Jim has also spent his life as a musician and has been featured in the films Dancing on the Edge and Pacific Vibrations. He has done other musical work as well, including live performance and working with producers and stage directors. Currently, he is working on the sequel to Ochoco Reach.
You might also like

by Don Messerschmidt on April 22, 2019
Paulo Coelho, the internationally popular Brazilian writer, has published 18 books to date ― fiction, non-fiction, and occasionally a mix of both. His most popular titles include The Alchemist, Pilgrimage, Adultery, and a novel entitled Spy. [...]
Submit Your Book