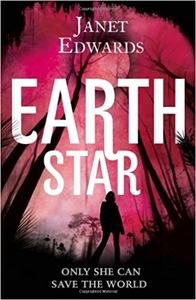 Earth Star is the follow up title to the young adult novel, Earth Girl. Picking up where the first novel left off, Jarra continues to battle the stigma of her being an ape — a human born with an immune system that will not allow her to survive on any planet other than Earth — despite having won one of the military’s highest honors. However, it is her unique background and skill set in Earth history and archeology that flags her as a military asset when an alien sphere appears hovering in Earth’s orbit. Jarra is suddenly flung into a staring role and must prove that Earth and its inhabitants are worth fighting for.

“‘Sir,’ I said, ‘this information is classified security code black. Alien Contact programme has been activated. Fian and I…’
‘We’ve been drafted by the military!’ said Fian.”

Janet Edwards has created a tough and likeable character in eighteen-year-old Jarra. The book and its characters wrestle with the age-old problems of fitting in, and learning your own self-worth, albeit in a futuristic sci-fi setting. The writing in Earth Star is incredibly fluid, and readers will find themselves finished with the novel in no time. It is not necessary to have read Earth Girl in order to understand and enjoy Earth Star, although readers who jump straight into volume two might feel like they are missing something, particularly as characters from book one reappear near the end.