Fired at 50: A Survivor’s Guide to Prosperity by Phyllis Green 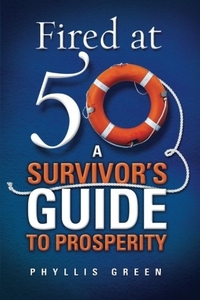 Phyllis Green started her career in media and advertising at a small radio station in Trenton, New Jersey. Over the years, she worked her way up the corporate ladder, eventually ending up in New York, working for ABC TV. She was respected and successful, living the good life—that is, until she was unceremoniously fired as ABC was acquired by a company focused mostly on the bottom line. Green tried to figure out what she, a woman in her early 50s, a woman who had spent the greater part of her adult life in pursuit of success (and had achieved it, only to have it whisked away), could do in order to reclaim her sense of self-worth and her financial comfort. Fired at 50: A Survivor’s Guide tells her story.

On one hand this book can be seen as a business how-to guide. But it is really Green’s memoir. It is written very casually and personally, filled with anecdotes about her professional experience, her trials and tribulations and the fabulous (and famous) people with whom she has interacted during her long and generally illustrious career. While Green suffered setbacks, her intelligence and business acumen allowed her to pick up the pieces and start a thriving advertising business in Florida—and all after the age of 50!

Those looking for a self-help career guide may gain some insight from Fired at 50, but overall the book serves as a primer for making your life what you want it to be.

By presenting her own story, Green, who has been a pioneer in her field since the days when female executives were next to unheard of, illustrates what can be accomplished with hard work, discipline, dedication and smarts. People often think that their life ends at a certain age. If nothing else, Green proves what absolutely malarkey that mindset is.