Fortune’s Spear: A Forgotten Story of Genius, Fraud, and Finance in the Roaring Twenties by Martin Vander Weyer 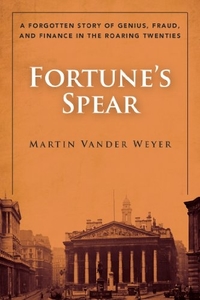 Martin Vander Weyer’s book, Fortune’s Spear, tells the story of Gerard Bevans, one of the leading lights of British finance in the early 20th century, who was ultimately disgraced and jailed for fiddling the company accounts, and conspiring to cover up his huge losses. This book is British, and was first published at the height of the economic downturn when readers would have had plenty of real life comparators. Weyer obviously strives to give Bevan a fair hearing, rather than condemning him in the court of public opinion as happened in his day. The most interesting part of this book is Weyer’s analysis of how much of what Bevan did would have never caused a second look if the market had prospered. Meyer is very familiar with finance and lays out exactly what was and wasn’t criminal.

The downside of this book is that it is very technical, and also very much for the British market. As a financial ignoramus, some of the technicalities of finance went over this reviewer’s head, as did the frequent references to British business law. Also, as an American reader, the historical value of money was given once in a footnote early in the book, but it was difficult to fathom how much money was really at stake. There are many readers for whom these complaints won’t be a problem, and who may really enjoy this book; however, for the casual reader who doesn’t have a special interest in finance or markets, be aware there is relatively little fraud in this book, and it can be heavy going at times.