Four Weddings and a Fireman: A Bachelor Fireman Novel by Jennifer Bernard 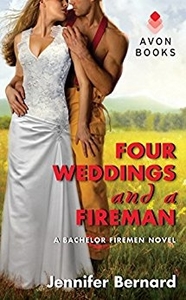 For most of his life, Derek “Vader” Brown has used jokes and pranks to lighten the mood, entertaining others at his own expense, but he’s been the fun guy for so long he’s not sure how to take himself seriously anymore. Even Cherie Harper, his on-and-off girlfriend, refuses to take his feelings for her seriously, to trust him with her heart and her secrets. When Cherie’s weird family catches up to her, her years of hiding the truth make Vader’s help difficult for Cherie to accept, but only by allowing herself to feel vulnerable can Cherie ever feel safe again.

The fifth installment of Jennifer Bernard’s Bachelor Firemen series, Four Weddings and a Fireman, is an unconvincing jumble of coincidences. Characters make impulsive, unreasonable decisions amid heavily contrived circumstances, and Cherie’s bizarre family members are exaggerated stereotypes of back-woods ignorance and teenage melodrama. Vader is a reasonably developed character, who grows as a man and a leader amongst his peers, but Cherie is incapable of thinking beyond her own problems in the present moment. The chemistry between Vader and Cherie starts out warm and optimistic, but becomes uncomfortable as both characters continue to misunderstand each other and themselves.

Although Four Weddings and a Fireman falls flat, the Bachelor Firemen—firefighters in San Gabriel who seem cursed to remain single—are a fun, exciting group of characters who will tempt readers to read earlier novels in the series, and to stay with this series in the future.