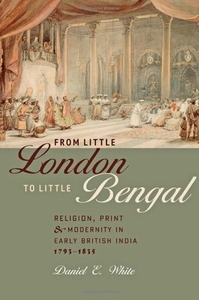 When people think of the British Empire in India, they mostly believe it was a one-way street: the British brought culture, art and literature to India, and colonial India contributed little to British culture. In this work Daniel E. White attempts to correct that misconception by showing how it was a two-way street. India influenced how Britain viewed the world and influenced the literature of early modern Britain. Britain, in turn, had an influence on the cultural elite of India and used what they learned to develop India into a cultural powerhouse.

This book mostly explores literature and print culture; it does not cover art or other forms of expression. Mr. White does a wonderful job of exploring the way Indians used the tools they learned from the British to further develop their own culture. The British who went back to London took what they learned in India and saw it influence their culture.

This is a book written for students, but the average reader will still enjoy this refreshing work. Examining the intermingling of two different cultures is always exciting and interesting.