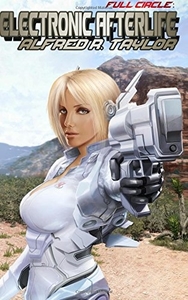 With a cover featuring a busty illustrated blonde out of every juvenile male fantasy and a title font that is usually reserved for science fiction of the less impressive variety, Alfred R. Taylor’s Full Circle: Electronic Afterlife did not inspire much hope for quality. What it inspired were expectations of stereotypical female characters being ogled by buffoonish heroes and flying around in spaceships with ray-guns attached to their voluptuous, fertile hips. Luckily, sometimes you really CAN’T judge a book by its cover. Full Circle is, in fact, a well-written, engaging novel. Taylor blends the past, present, and future and combines historical and science fiction into what is actually a really fun read.

The novel begins in 2004 when Mark Aaron is offered a mysterious assignment by his illusive and illustrious boss, Mr. Nora. Unable to postpone a trip with his wife, Mark rejects the job, but leaves with a few parting gifts. However, life will never be the same. Mark and his wife board their plane not knowing that it is bound for disaster—or that Mark will die as a result of the crash.

But does he really die? Awakened in a spaceship hundreds of years in the future, Mark meets a variety of androids and learns that he, too, is one of them. While his human emotions refuse to fully leave him, and thoughts of his wife are persistent, Mark and his android companion Jane (the woman pictured on the novel’s cover) are sent on a mission to go back in time to 1842 Springfield, Illinois, and take steps that will prevent the assassination of Abraham Lincoln. Yes, the premise is far-fetched, but somehow it works.

Taylor’s writing is strong and there is humor throughout the novel as Jane tries to fit in with humanity and Mark tries to adapt to both the past and future and his android status. At the same time, characters encounter historical figures and current 21st century morals are contrasted with the morals and styles of the past. A good, enjoyable read, regardless of whether or not one has read the other books in the series.