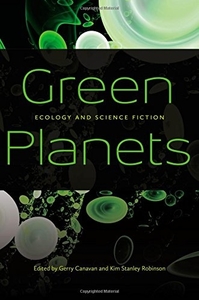 Green Planets, Ecology and Science Fiction, from editors Professor Gerry Canavan and Kim Stanley Robinson is a fascinating rumination on how environmental thought and concern has been received by science fiction. The book is for the academic, literary student, or the serious sci-fi fan who wants an intellectual exploration of “green” thought in the genre. The book is dense, but it is filled with interesting ideas and arguments. The writing tends to be more philosophical than historical, but most of it is usually understandable despite the intellectual language.

“So our culture is not yet scientific enough; when it becomes so, we will be making more rapid progress toward both justice and sustainability, as the two are stranded parts of the same project. At least this is the story I’m trying to tell.”

There is a great deal to draw from for these collected papers, and the book is open-ended with a long list of other works interested readers can further explore. The book is anglophone in scope, but not usually intergalactic. Green Planets discusses famous sci-fi works in philosophical treatments, but also books that are less widely read. The book presents these works in a new light, and introduces the reader to things they might not have been aware of before. Though one might not always agree with all the arguments made in the book, they are mostly about our special shared planet.