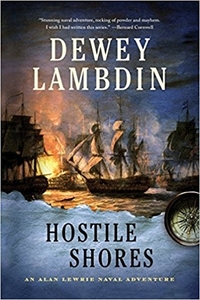 Hostile Shores is book nineteen in the Alan Lewrie series based on a 19th Century sea Captain from the King’s Navy who has made a name for himself, though he feels he hasn’t earned any of it. With an impending invasion from the French and Spanish, Lewrie is determined to protect the scantily protected little seaport of Nassau, as his life depends on it.

“Oh, mine arse on a band-box, Lewrie thought with a chill in his innards; It’s the bloody French, come at last!”

Having not read any books from this series since The King’s Commission, this reviewer was a bit leery that she would not catch up to the story line. Quite the opposite. Dewey Lambdin is the Shakespeare of nautical literature pouring his penchant of sailor talk fluidly across the pages providing readers a rhythmic story that rolls off the tongue with ease and before you know it, you’ve read the entire book.

Whether you have read any of the prior Lewrie books or just picking up your first maritime nautical adventure book, this would irrefutably be a good place and good book to start. You will be sucked in hook, line, and sinker!