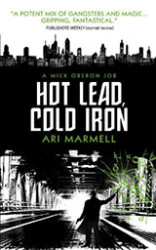 Hot Lead, Cold Iron is a 1930s crime noir with the addition of fae (or fairy) creatures that hide within our world. Private Investigator Mick Oberon was once a prince of the court, but for reasons of his own, he left everything behind and made his home in our world. Despite his reluctance to have anything to do with his fae relatives, when he’s hired to investigate a missing girl replaced by a changeling, he is left with little choice in the matter. While chasing leads, Mick quickly gets caught up in fae court politics in the Otherworld, as well as the seedy side of Chicago’s criminal underworld. With a little bit of luck Mick might just be able to dodge the iron-toting thugs and magic-wielding fae long enough to find the missing girl.

“Actually, I woke up ready to go hide in the corner with a blanket pulled up to my chin, but I headed out to face the new day anyway.”

Ari Marmell created a new and interesting urban fantasy character in Mick Oberon. Despite the fact that he frequently breaks the fourth wall and talks directly to the reader, he still manages to remain a somewhat mysterious figure – particularly because his reasons for leaving the fae court are never revealed in depth. The magic tossed around in Hot Lead, Cold Iron revolves around manipulating luck and misfortune, a different take from most books involving magic. The fae in the book are clearly based on the older mythologies, and their cruelty and manipulations is clear to see – even if our biased narrator influences the reader’s expectations. Fast paced, with plenty of 1930s Chicago stereotypes, Hot Lead, Cold Iron is a quick and enjoyable read.