It Came! By Dan Boultwood 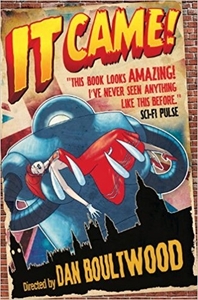 Out for a relaxing drive in the country, Dr. Boy Brett and Doris Night are suddenly thrust into matters of national security upon encountering an alien robot from outer space. This huge robot creature – which only communicates through a series of grurks – seems intent on its mission to cause large amounts of destruction while abducting the British locals. When the military fails to halt the machine with conventional weapons, it’s up to Boy, Doris, and many cups of tea to bring down the menace before it’s too late!

“Right-O lads. Now, does everyone have their pipe for optimum sciencing?”

It Came! by Dan Boultwood is a fantastic graphic novel parody of British science fiction movies from the 1950s. Beginning with spoofed advertisements common to the time period, full of as much British slang as could possibly be used in conversation, and continuing with a giant flying saucer held up by string, It Came!  elegantly makes fun of itself and the old-school science fiction film genre. This book is a perfect gift for graphic novel fans who are looking for some great humor, and anyone who loves campy old science fiction films.