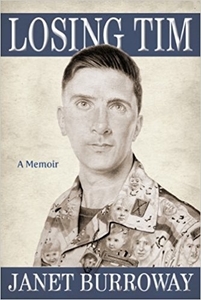 Warning: Losing Tim by Janet Burroway is not for the faint of heart. There are heavy subjects in this memoir of a family who loses one of their own. Readers meet, Tim – a soldier who heads off to war to fight for his country but ends up taking his own life.

This isn’t a spoiler – the ending is written all over the book. Losing Tim is a love letter from mother to son as she tries to understands why he did what he did. It was hard to see a mother trying to grasp and accept her son’s suicide. She shares how it affected herself and Tim’s whole family. When I was finished with Burroway’s book, I was reminded of Joan Didion. She dealt with loss as well, specifically two massive losses. Like Joan, Janet has to deal with her loss and try to move on. No easy task for either woman and their families, but they must move on for their sanity and their families’ sanity. In other words, Janet must put on a brave face, but one that may crumble easily.

It was hard to fathom why Tim did what he did – from signing up to going through with the suicide. But as a reader, a passive participant, I could only sit back and read what was about to happen. I could see that he wanted to be a proud American and serve his county. But the question that kept going through my head, was Why? What about the costs associated with his decision and the way it would affect his family? It was almost a selfish decision to commit suicide. But I think you will understand his decision after reading this book. I was able to see his reasons, hard as they were to make.