Moonlight on my Mind 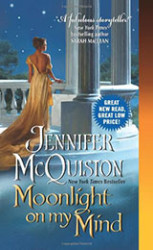 Society believes that Patrick Channing killed his own brother because dazzling Julianne Baxter said it was true. Now, exiled from his home and alienated from what family he has left, Patrick is furious that Julianne has found his hiding place in the Scottish village of Moraig. Unable to forget the role she played in Patrick’s downfall, Julianne has come to finally bring him home, where his father’s death has left his mother and sisters in dire financial straits. Forced to ally himself with the woman who betrayed him, Patrick tries to hate the beautiful liar, but in the end his desire for Julianne may be greater than his need for revenge.

Julianne Baxter is immature and disastrously fashionable, a surprising mix of compulsive quirks and impulsive decisions. Patrick Channing is fiercely controlled, and accustomed to hiding his interest and training in veterinary medicine from a disapproving society. Their opposites-attract romance dances in and out of a moderately twisty murder plot reminiscent of a good game of Clue, featuring greedy cousins, ill-tempered neighbors and a bumbling magistrate. Jennifer McQuiston’s Moonlight On My Mind is a thoroughly enjoyable blend of sweet romance and old-timey intrigue.